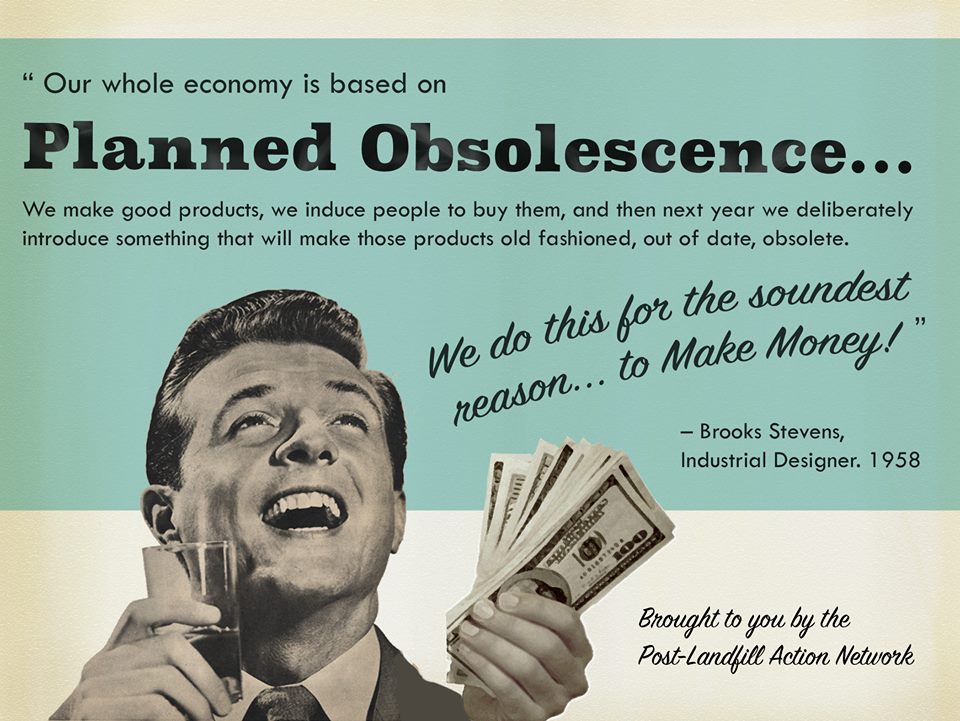 “In economics and industrial design, planned obsolescence is a policy of planning or designing a product with an artificially limited useful life or a purposely frail design, so that it becomes obsolete after a certain pre-determined period of time upon which it decrementally functions or suddenly ceases to function, or might be perceived as unfashionable. The rationale behind this strategy is to generate long-term sales volume by reducing the time between repeat purchases. It is the deliberate shortening of a lifespan of a product to force consumers to purchase functional replacements.” (Wikipedia)

Planned obsolescence is a feature of products so that companies can sell more stuff. If things were designed to last people would continue to use the product they bought and not buy the new one. Companies design products to break or become obsolete even when they continue to function perfectly well. A good example is computers which need to be replaced to the new model in order to be able to run the new software or to update existing software. I bought a MacBook in 2009 and it became obsolete by 2013 because I could no longer update the operating system and all the new apps or updates were only available on the new operating system.

While the traditional tango danced by the milongueros could be learned fairly quickly and lasted a lifetime, the new “Argentine Tango” that’s been marketed globally since the 90s is designed for obsolescence and inefficiency. It’s the same business model as ballroom dancing which is designed to keep students learning completely useless dance choreography under the impression that it’s “social dancing”.

Social dancing, for it to be functional, needs to comprise of relatively simple choreography. It’s not meant for dance professionals or people who are keen on attending a lot of dancing lessons just for the sake of it. It’s meant to be relatively easy to learn and to be danced with a range of different people for the purposes of enjoyment of a social occasion.

By contrast, choreography is designed for performance, typically by professional dancers, with a practice and performance partner. Another alternative might be something like a wedding dance or an amateur performance. Either way, it’s a case of learning something for a specific purpose which involves a set pattern of steps and a limited number of partners similarly trained.

Now, if you attend a lesson in “social dancing” in which you learn some extended pattern of steps, and then practice these with a limited number of partners at a “practica” you’re essentially saying that you will only ever dance with these people, or other people who know these same steps and techniques.

There are number of problems with this approach to dancing education.

First, the people who create these patterns are often trained professional or semi-professional dancers who have experience in a number of dances, often in something like ballet. Without such background these patterns don’t work very well.

Second, different teachers of this type of choreography will teach the technique differently, so that people from different schools, even if they know the same “steps” might execute them differently, and this will interfere with the efficient execution of these steps and patterns.

Third, these patterns observably take a lot of space. While the natural assumption might be that in the studio students need a lot of space to practice these steps but with enough experience they will become more efficient and develop “floor skills”, in practice one finds that few people going through this type of training learn good control and efficient use of space. It seems that these patterns are inherently consumptive of a lot of dancing floor space. This is natural given that these patterns are essentially show routines adapted for “social dancing”.

Finally, the system of teaching requires enough material to fill up at least 60 minute slots such that students feel that they’re learning new and exciting material which leads inevitably to piling on of more and more such patterns. Few teachers stop at a “paso basico”, “cross” and “ocho”, and once the student has done a few of these “beginner” lessons they can move on to an “intermediate” course that piles on more and more patterns. After that, the teacher or workshop instructor will bring in more exotic patterns that are more “advanced”. Then over the years there will be further innovations with new names introduced by the “latest” best couple from Buenos Aires, and so on and so forth, wash-rinse-repeat.

Now, if you have all these people on the “Argentine Tango” scene who have gone through a lot of this type of instruction you are probably going to get certain sorts of results. First, there will be a lack of confidence in dancing. If two people dance together they will never be sure how to respond to their patner. The man can never be sure what they woman will do, and the woman can never be sure what the man is leading. There is going to be a lot of room for miscommunication. The dancing will be slower and the dancers will have to fall back on looking at the feet thus compromising their posture and making the dancing less efficient and pleasant. You often see people staring at the floor/feet and chuckling, because they’re effectivaly trying to guess what their patner is doing and this creates uncertainty and tension. They are “in the head” and not “in the body”. What works as training for a show does not work as training for social dancing with people you don’t know well.

Second, people will get frustrated with a lot of conflicting ideas and information and lose faith in any notion of “proper” or “correct” technique. Teachers will start losing authority and students will start losing discipline and will start pulling in different directions. They will act like ill-behaved children, refusing to follow rules, dress properly, will start doing weird stuff on the dancing floor, and exhibit passive aggressiveness. The mood of tango events will be low and scattered, there will be little focus or confidence. People will start focusing on things they can control, like fashion, networking, etc. Social dancing will start to feel like an unwelcome necessity, and excuse for the other things.

These sorts of reactions are typical of learning situations which emphasise interest, which are against “ableism” or skill, and which move in the direction of “edutainment”. Private language schools and anti-ableist Contact Improvisation jams exhibit similar sorts of responses. Generally speaking the development of competence does usually require a relatively linear system of training where there is a relatively well-defined goal or outcome and the teaching is designed to move the student in that direction. In an “edutainment” sort of a situation the goal is the performance of a lesson where students are able to execute some tasks during the lesson.

But while the lesson can be called a “language lesson” or a “dancing lesson”, that does not guarantee that the outcome is any meaningful learning of the language or of dancing. There will be some learning, but the question is whether it will be enough to provide functional skills that can be used at the end of the course. What in fact happens in the “edutainment” type of situation is that students are kept busy and entertained but eventually become frustrated because they lose a sense of progressing towards any specified goal.

One thing that I have learned over the years both as a learner and a teacher is that a major part of learning is developing a meta-language. When you learn something this is usually accompanied by discourse or conversation about the learning process itself. For example, when you learn a language there will be a meta-language that describes the language itself, such as the language of grammar, vocabulary or pronunciation. This meta-language can have a huge impact on how the learner conceptualises the learning process and what it is possible to accomplish. For example, the meta-language of accents tends to have a negative impact on the learning of correct pronunciation which requires students to learn things like vowels, word stress and sentence stress.

What that means is that the meta-language of the learning situation has a huge impact on the students ability to bring the learning process under control and to become autonomous. Successful learners are autonomous learners, and successful teachers create autonomous learners. There is a common misconception that being an autonomous learner is being either self-taught or being “independent” or “self-directed” so that teachers should just let the students do whatever they want or give them “independent study” tasks. These sorts of education ideals and experiments consistently fail. Instead, to become an independent learner the student needs rules, in particular, he needs the correct meta-language.

The metalanguage of accent training is correct for actors who have to learn a specific accent for a movie. It is wrong for foreign language learners who need to learn the correct pronunciation that is relatively neutral. The meta-language of choreography is correct for choreography learning, that is, for learning to perform a choreography, on an empty stage or dancing floor, with a practice/performance partner. It is the wrong meta-language for social dancing.

But what has happened is that “Argentine Tango” is being taught by show dancers who have spent relatively little if any time dancing socially. This is not unique to tango. The same thing has happened to all of these latin and ballroom dances. Studio trained choreography teachers who only understand the meta-language of performance become the teachers of social dancing probably because there is more work teaching social dancing than doing stage performance. Then the impressionable students come to be convinced that this is the correct way of approaching the learning of social dancing. Then, when it’s not really working for a lot of people the leftists came in with the idea that this is somehow “oppressive” and that people should “liberate” themselves by “letting go” and doing whatever they feel like.

Now, we may ask how it is that we’re getting the wrong sort of teaching of tango. Is this a bug or a feature? Well, the reality is that the social dancing industry depends on a system of “academic” dancers who make a name for themselves doing stage performances and then give workshops in “social” dancing. Few people are observant or reflective enough to come to a realisation that this makes little sense. Most quit or develop a negative, passive aggressive attitude by the time it hits them that this doesn’t work. And that’s for the most part what we’re seeing on the global “Argentine Tango” scene today.